You've already read the headlines out of the Zen-Noh 2014 World Team Table Tennis Championships, and i'm not planning to repeat them; it's not that kind of recap. This one is a little more first-person.

I go to a lot of tournaments, but not as a spectator. Occasionally people ask me to be their match coach at a local tournament, but besides those instances, it's been many years since i've gone to a tournament where i'm not an official.

So i was in an unfamiliar situation, in that i could cheer for particular players - Team USA in this case.

At this Worlds i had a couple meetings each day in Yoyogi National Gymnasium, and therefore i was able to watch several of US Women's Team's contests against their first division opponents. Meanwhile, i had no opportunity to watch as the Men battled through and went undefeated in their group at Tokyo Metropolitan Gymnasium.

Though i haven't had the chance to watch much of it, the video coverage at this Worlds was the most extensive ever. In the main hall, first division matches were broadcast simultaneously from two tables on ITTV and one table on TV Tokyo. Then in the second hall, the remaining divisions had three matches simultaneously broadcast on YouTube. In addition i'm told that the remaining six courts in the main hall were recorded by the ITTF, though i don't know where that video will surface.

The US Men (Timothy Wang, Adam Hugh, Jim Butler, Yahao Zhang, and Kanak Jha) had a tough elimination draw. They needed to reach the finals in order to get a guaranteed promotion to second division in 2016. When i saw the draw i had guarded hope, as our first opponent (after a bye) would seem to be Lithuania, who had defeated us in 2012. We would need to beat them as well as one more team to reach the final. But Kanak said that the team had identified Saudi Arabia as a strong and a more likely opponent, and they was right. So despite being the top seeds in the division and going undefeated in group play, the US was drawn in a half which included #2 Switzerland, #4 Lithuania, the strong team from Saudi Arabia (who beat Lithuania before knocking us out 3-2), and eventual division winners Puerto Rico. I don't think it was possible to get a tougher draw.

To my eyes, the loss to Saudi Arabia was largely because the Saudi ace was on fire that day. Nevertheless, the Men fought to the end, and you can see their final contest against Saudi Arabia on YouTube.

There are no easy groups in first division and the US Women (Lily Zhang, Prachi Jha, Crystal Wang, Erica Wu, and Angela Guan), seeded fifth in their group, were up for the challenge. Their first contest of the tournament against Hungary was perhaps their biggest opportunity for an upset, but nerves were a factor and it was a tough loss for us as Prachi was up 9-6 in the fifth game of the final match.

The second contest was a 3-0 loss to host and eventual finalist Japan. It's one thing to be playing on center court in a noisy arena; it's another to be playing on court one when the cheering is targeted directly at the court you're playing on. The ladies handled it well and i think they enjoyed it, despite losing 3-0. I wasn't able to watch these matches live, but saw some on TV. The Japanese commentators seemed to relish calling Lily Zhang, "Lily-chan".

Sizable groups of fans were in attendance from day one, and i say "groups" because there were two distinct contingents. The Japanese fans obviously had a lot to cheer about, but there was also a large crowd of North Korean fans, presumably Koreans living in Japan. Both groups were kept in sync with their own cheerleaders, and it was sometimes jarring to hear the clash of applause when North Korea and Japan were both playing, on different tables. Seiya Kishikawa seemed to have a hard time playing while the Korean fans were singing a tune, over the course of several points during his match against Kalinikos Kreanga.
The US Women got on the board after the next contest, a 3-0 win over Australia. The following matchup against Belarus looked to be a tough one, and chopper/coach's pick Angela Guan worked hard to help prepare her teammates for the upcoming challenge. One expert told me that Crystal was our strongest player against chop, but i have long believed that Lily ought to beat almost any female chopper, given proper instruction and guidance. Even so, given her past results, i didn't expect her best career win to come against world #11 Viktoria Pavlovich. Unfortunately we were short of the upset again, as Prachi lost in the fifth against Alexandra Privalova. And though Crystal got the desired matchup against chopper Elena Dubkova (who sported a much improved attack), she also couldn't win in the fifth game.

In the knockout stage the US Women seemed to have a decent draw - not especially lucky, but not bad. The immediate goal was to reach the semis, guaranteeing first division placement in 2016; that would require a win against Serbia and then against the Czech Republic. I fully thought we could beat Serbia 3-0, but it was not to be. Crystal might beat Ana-Maria Erdelji the next time they play, but this was Crystal's first time ever playing against a short pip chopper, and the spin variation off Erdelji's racket was noticeably different from long pips. The ladies had their chances, but the Serbian girls played tough. A variety of the US Women's contests can be seen on YouTube and ITTV. 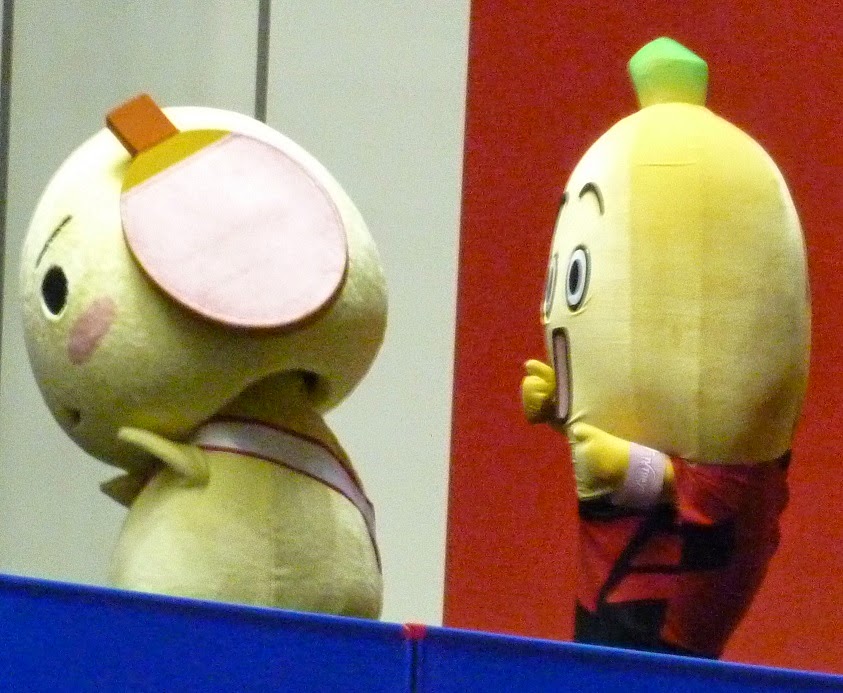 The 1983 Worlds were also held in Tokyo, also in Yoyogi National Gymnasium. History repeated itself this year in the women's competition, as the host Japanese team came in second place against China. For the third time in a row, the men's runner-up team was Germany, behind China. Back in the day, the Swedish men placed second three times in a row (1983, 1985, 1987) before they won in 1989.

Unlike in 1983, and every other year until 2013, the competition was held in two different facilities. Running a team competition in two halls wasn't a huge problem for the players, as most teams played every match in either one hall or the other. But it was an additional burden for the organizers, and for coaches, captains, and spectators who would have to go back and forth between gyms.

Whatever the hardship, things were always smoothed over by the superb hospitality. Long one of the most modern cities in the world, the reliance on manpower in Tokyo was noticeably higher than we normally see in the US. Everywhere you went, members of the tournament staff were stationed along the way to bow, smile, and greet every single person. Information desks were constantly manned at the hotel and the playing venues. Not only were the staff numbers high, they were all diligent and well-organized. Volunteers joking around on break were hard to find.

Table tennis is one of Japan's two national sports and their love of the sport is evident in the media (numerous print media sources and constant TV coverage), the event support (over a thousand staff members), and the general care put into the event and its attendees. The week of the tournament was scheduled to coincide with four federal holidays: Shōwa Day, Constitution Memorial Day, Greenery Day, and Children's Day. Also in the middle was the observed but not official May Day holiday.

The 6.0 earthquake on the final day was the opposite of a holiday, but provided an additional dose of excitement for both residents and visitors.

As i said before, i was not an official at this tournament. But i wasn't there just to hang out either. The World Championships is the most convenient event for table tennis people around the world to meet, because many of them will be going there anyway. President Adham Sharara said he had 87 meetings at these Championships. My meetings were much fewer in number, and only about equipment or our association. The non-celluloid ball was a hot topic of course, but the ball is not my area of focus; here are a couple of things i brought:


2014 is not a major election year for the ITTF, but a new Athletes' Commission was elected. Vladimir Samsonov, the consummate gentleman, was re-elected as chair of the commission. The proposal to have an athlete position on the Executive Committee failed by a narrow margin in the AGM. I'm told that a major reason for failure was due to a misunderstanding of the proposal. Perhaps it will come up again next year.

More details about the events at these Worlds will come in another entry.
Posted by Unknown at 4:14 PM