Several months ago, I showed up at one of the Schaumburg Table Tennis Club's bi-monthly tournaments. I do this on occasion because I sometimes serve as the tournament referee, but this time was a little different because I had brought with me a MiniRAE Lite VOC detector - the standard device currently used in table tennis competitions to detect illegal chemicals in rackets. The players were a little surprised to see this serious device used at a local competition, and a couple illegal rackets were found, but otherwise it was just another tournament. 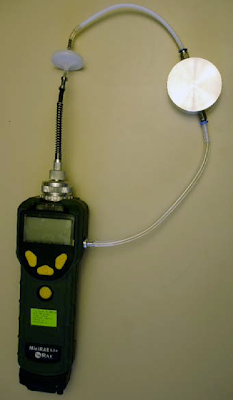 I've used the MiniRAE device in about a dozen tournaments now. It's not perfect but it's far better than the methods we used in the past, and overall I'm pretty happy with it. The readings are consistent; for the last three years, every time it's been checked for calibration, I believe it's been spot on. The only failings of the device that I've seen have been the result of user error.

I don't normally carry this thing around to small tournaments. Very few players use high VOC chemicals, and today's rubbers are pretty good without speed glue. But as a player I want to know that my opponents are following the rules - including the equipment rules - so for an honest player, having racket tests is a good thing.

Tournament officials check rackets for other things besides VOCs; in particular thickness and flatness, verifying that the rubber is authorized, making sure the rubber is properly glued and not damaged, etc.

From my experience, the two biggest reasons a racket will be ruled illegal are because of excessive thickness and excessive chemical (VOC) levels. Sometimes this is because a player is trying to cheat by adding chemicals to their rubber. But other times, it's because an honest player made a mistake at some point in preparing his or her racket. I don't think any official wants to throw out an honest player's racket, but the VOC and thickness limits set a firm line that can't be crossed. If a player takes some care in racket choice and assembly, there shouldn't be any problems. You don't need to be obsessive, you just need to know what to watch for.

Here are two more pieces of advice regarding racket assembly, which probably won't make your racket any more or less legal, but will help maintain it better.

Email ThisBlogThis!Share to TwitterShare to FacebookShare to Pinterest
Labels: Equipment